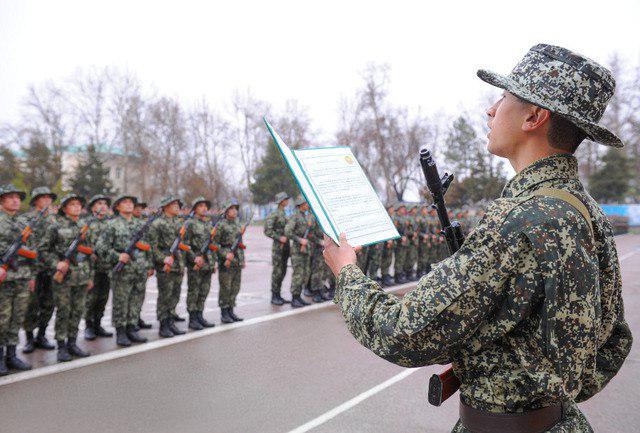 President Shavkat Mirziyoyev signed the law “On amendments and addenda to some legislative acts of the Republic of Uzbekistan in connection with the improvement of legislation in the sphere of security and defense”.

The following changes have been made to the law of Uzbekistan “On universal military duty and military service”:

in Article 3, the words “Military oath” are replaced by “Oath to the Motherland”;

Article 6 (text of the oath) is amended as follows:

“Citizens, who have been conscripted or have voluntarily (under a contract) entered the military service, take an oath to the Motherland in front of the State Flag of Uzbekistan with the following content:

“I, (full name), joining the ranks of the Armed Forces of Uzbekistan, kissing the holy flag – a symbol of my state, solemnly swear:

to honestly fulfill my duty before the Motherland:

to be faithful to the Republic of Uzbekistan, its people and the President;

until the last breath, to defend the independence of the Motherland, the inviolability of its borders, peace, tranquility and national interests of my people;

to irreconcilably fight any manifestations of aggression and selfish encroachment against the Republic of Uzbekistan;

to honor the Constitution, laws of the Republic of Uzbekistan, military charters, to protect state and military secrets;

in any condition – on the land, in the water, in the air, to conscientiously perform my duty;

under any circumstances, trials and difficulties to justify the high confidence of my Motherland”.