The first point of the two-day trip of President Shavkat Mirziyoyev to the Fergana region was the Altiaryk district. 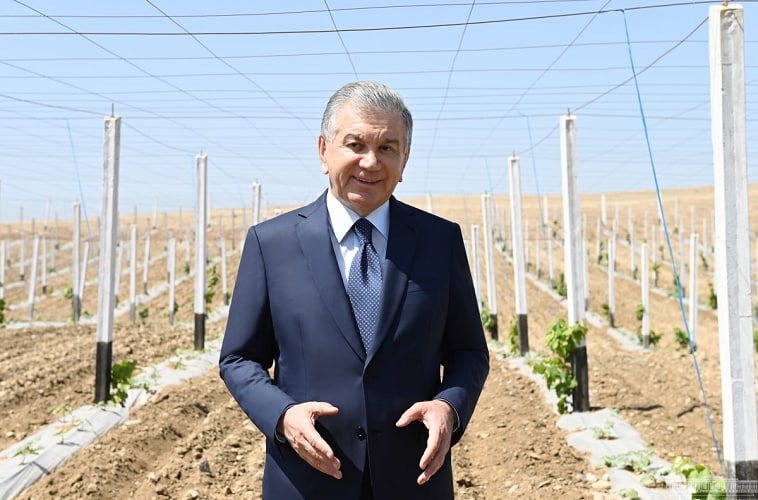 According to the press service of the head of our state, the President has repeatedly stressed the need to develop the regions, taking into account their specifics and the skills of the population. The advantageous point of the Altyaryk district is the developed agriculture, the agricultural skills of the inhabitants. In particular, Altiaryk grapes acquired the status of a brand abroad.

To increase production, a vineyard and orchard have been planted on the outskirts of the district, on a hilly area of     a thousand hectares.

The President visited this complex.

In the past, these places were not used. As a result of an innovative approach to the development of agriculture, thousands of hectares have been developed. For this, wells and reservoirs were dug, drip irrigation was introduced. At the same time, equipment and materials of local production were used.

On 560 hectares of mastered land, grape varieties were planted. An intensive garden of 300 hectares was established.

Watermelons are grown between the rows, depending on market demand - red pepper, bell pepper, cucumbers, herbs, and other melons. This will be an additional source of income for the population.

- Fergana achieves great results in agriculture, people’s outlook is changing, farmers are exporting. But yesterday’s result no longer meets today’s requirements. We need to be constantly on the move. It was enough to make a little effort, and now such a large garden appeared. We still have many internal reserves. These opportunities should be directed to the benefit of our people. Fergana should be an example in this direction, President Shavkat Mirziyoyev said.

A modern agro-industrial complex will appear here - a refrigerated warehouse with a capacity of 1.5 thousand tons, consumer service points. 6 mini-tractors and 10 trucks will be purchased. The population will be provided with allotments in the garden and vineyards. This will create great opportunities for the Altiaryk people.

The head of state talked with farmers and heads of Fergana clusters.

- These orchards and vineyards will be privatized. The complex will create more than 3,000 jobs for unemployed youth and low-income families, including migrant workers who have returned from abroad. The higher you gain the buyers’ confidence, the more people will receive income, the President said.

The President talked to the workers.

Presentations on the development of fruit and vegetable growing and floriculture in the Fergana region were also held here.