213
Share
Facebook Twitter Telegram
New bill: If the Parliament rejects a member of the government, the Prime Minister will nominate a new candidate for reviewing and approval 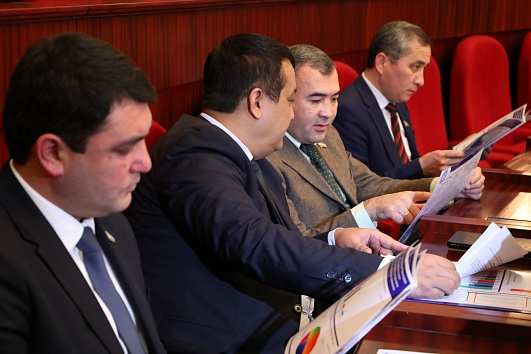 In accordance with the presidential address to Oliy Majlis on December 28, 2018 and the Decree of January 28, 2019, a new procedure for appointing and approving members of the Government is being introduced.

The nominee represents a plan of actions that envisages legal, social, economic, organizational-technical measures and perspective tasks on achieving targeted goals and objectives that are interconnected with the Action Plan of the Cabinet of Ministers.

If the Legislative Chamber rejects a member of the government, the Prime Minister will nominate a new candidate for reviewing and approval. The government member will begin his duties after being confirmed by the president.

At the same time, the draft considers a new procedure for reviewing the report of the Government on implementation of the State Program for the current year, coming from the presidential address to Oliy Majlis.

Accordingly, the prime minister together with the members of the government will submit quarterly reports on implementation of the state program for the respective year coming from the Application to the Parliament.

Deputies emphasized that the proposed changes and additions will serve to adopt important decisions and control over implementation of laws by Oliy Majlis, as well as increase responsibility of the government members at the Parliament.

15:08 / 09.01.2020
Law on administrative-territorial structure of Uzbekistan to be adopted in a new edition

14:24 / 16.11.2019
Fines for obstructing movement of emergency vehicles to be significantly increased