No coronavirus has been detected among passengers, who arrived from South Korea to Uzbekistan. However, they will be under medical surveillance for two weeks. 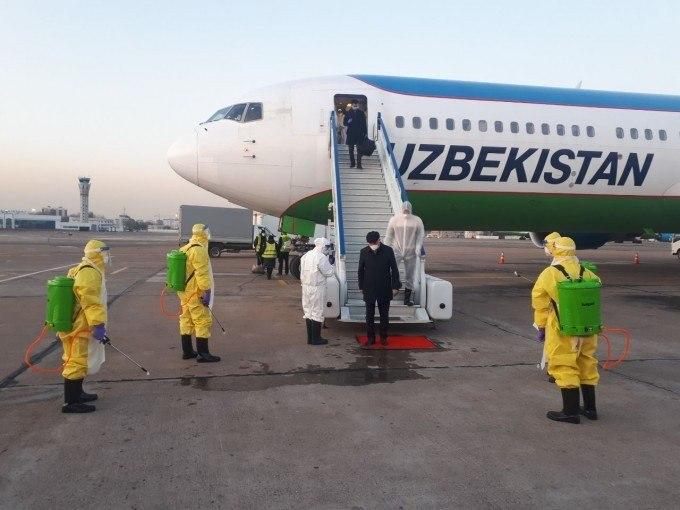 Today, February 27, the flight HY514 passengers, who arrived from Seoul, have been inspected at the Tashkent International Airport Terminal.

“On February 26 of this year, the Uzbekistan Airways flight HY 514, which operates on the Seoul-Tashkent route, took off at 19:02 by the Tashkent time. One of the passengers aboard, a citizen of the Kyrgyz Republic B. T. (born in 1996), felt sick with signs of stroke. Then the plane returned to Seoul at 20:55. At the Seoul Airport, the patient, her child and one more citizen were offloaded from the flight and laboratory tests were carried out against to check if there was coronavirus infection.

Then, at 22:59 by the Tashkent time, the aircraft took off from Seoul with 232 passengers and 12 crew members aboard and arrived at the Tashkent International Airport on February 27 at 05:58 by the local time.

In order to prevent the spread of coronavirus in Uzbekistan, passengers arriving from Seoul were temporarily placed in a separate hall of the Tashkent International Airport Terminal and the Health Ministry of Uzbekistan conducted a series of necessary preventive measures.

Reportedly, according to the results of the laboratory analysis, no signs of coronavirus infection were found in B. T., the citizen of the Kyrgyz Republic, who remained in Seoul,” the Public Affairs Department of the Health Ministry reports.

A ministerial official told Kun.uz that the passengers placed in an isolated area of the Tashkent Airport will now be released after a medical check-ups, but they will be under medical surveillance in their place of residence for two weeks – a restrictive order will be introduced against them.

Earlier, it was reported that passengers arriving from South Korea to Tashkent were isolated.

12:46
New procedure for issuing special permits to operate a vehicle during the quarantine announced

21:06 / 30.03.2020
Procedure for getting loan repayment period extension to be simplified
Leave a comment.You must register to post a comment!
Authorization with social networks