The next case related to the death of a citizen on the hands of DIA officers took place in Kuvasoy. Shortly before his death, the deceased prepared pilaf at home and went to the store to buy tomatoes. It is not yet known how he came into contact with the policeman and why it was necessary to check the state of intoxication. Relatives do not believe that it was a natural death. Findings of the Kun.uz correspondent increase these doubts even more.

A 60-year-old citizen died in Kuvasoy, Fergana region, when his health worsened while being taken to the medical center for drunkenness examination by the DIA officers.

Relatives of the deceased say that the man died as a result of being beaten by the precinct supervisors. Kun.uz correspondent made an inquiry about the situation. 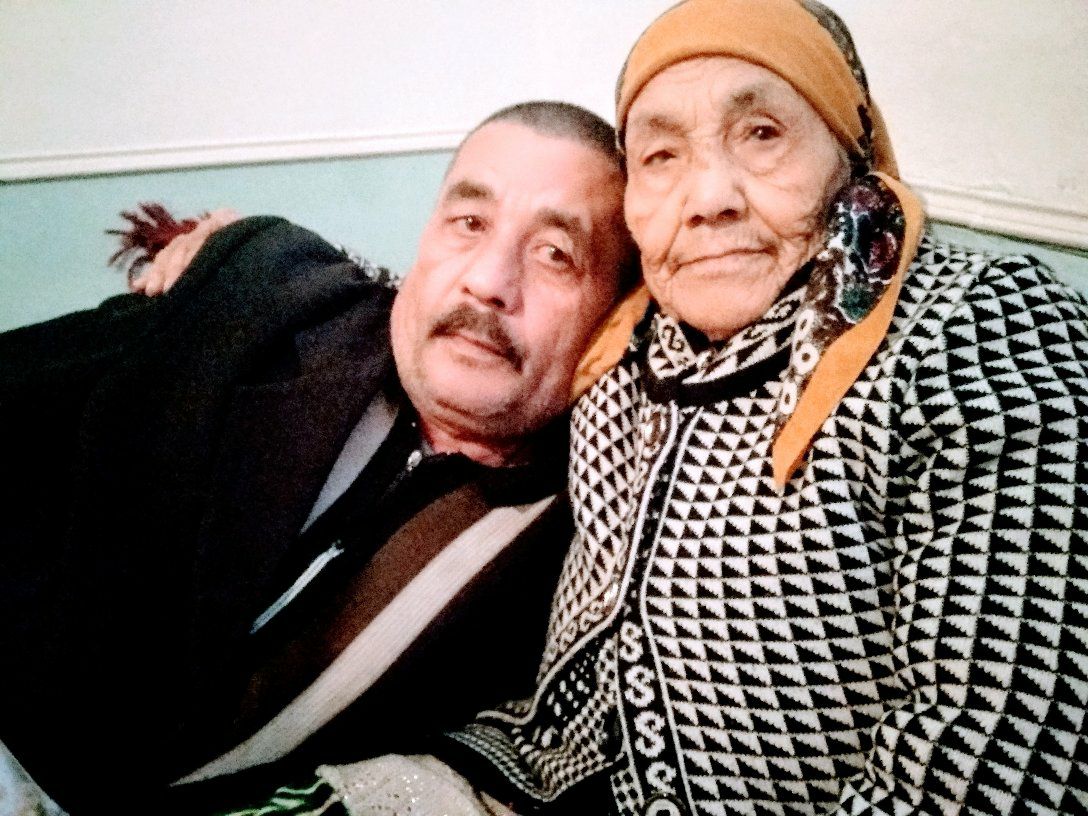 According to the preliminary information of the forensic medical expert, the deceased Khaydarali Tashpulatov was diagnosed with “ischemic heart disease, acute coronary insufficiency, right-sided pneumonia, chronic pleurisy, hemorrhage into the pancreas, alcohol poisoning”. 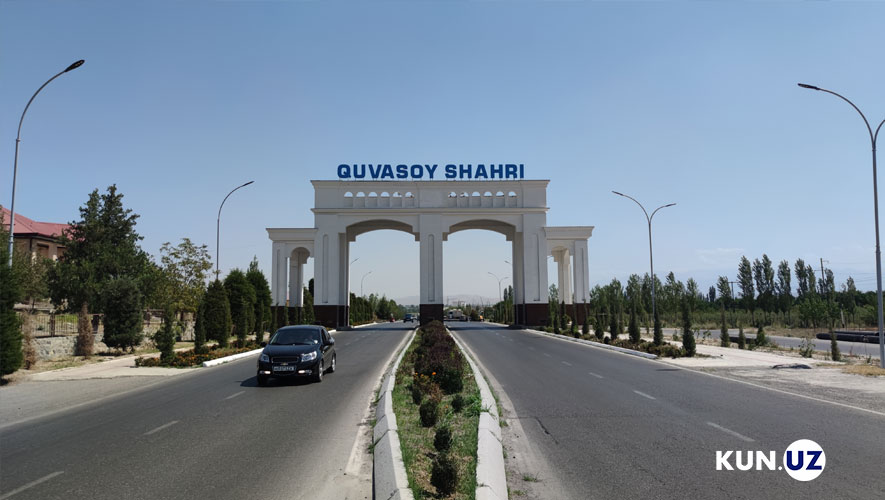 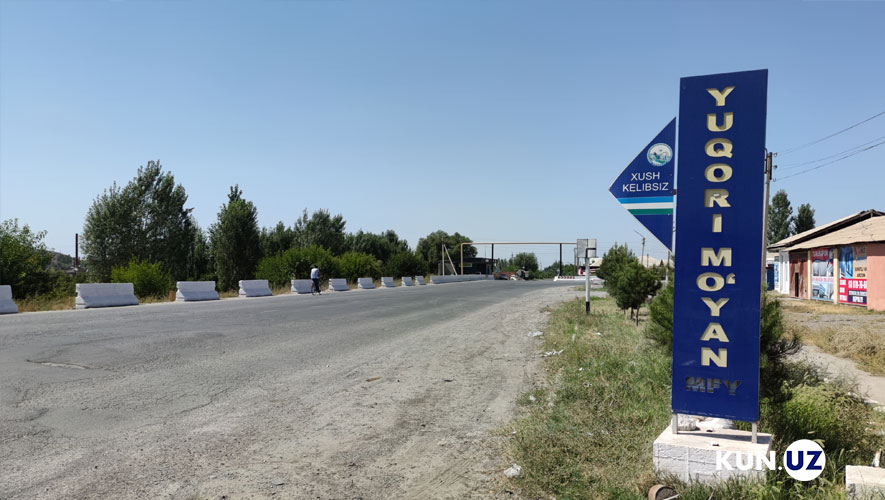 What caused the deceased to quarrel with the prophylactic inspectors?

The deceased used to work as a guard in one of the construction organizations in the city of Fergana. While he was working, his two grandsons entered the neighboring house and broke the spare parts of a TV set. Everything started from this.

According to the daughter-in-law of the deceased, Gulmira Tashpulatova, her father-in-law died for unknown reasons after a dispute over a spare part incident:

“When I come home from work, my children were not at home. I thought they must be playing in the street as usual. After a while, I was told that my sons were being taken away in a car by prophylactic inspectors. I called my husband and told him what happened.

My sons usually went to their classmate’s house to play. On the same day, they entered the apartment, damaged DVDs and tuners, and took the magnet inside. The house owners were angry about the situation and complained about it to the mahalla chairman, and soon he and the prophylactic inspector arrived there.

Then the prophylactic inspector took my husband to the his room to discuss the case with my children. After a while, another uniformed officer and a person in civilian clothes came and entered that room. I was standing outside when suddenly a noise inside. When I told the mahalla chairman that my husband was being beaten, he said not to interfere in men’s affairs. When I entered the room, my husband was lying on the floor. When I tried to record the situation on my phone, they resisted. After that, my husband was taken to the city DIA. 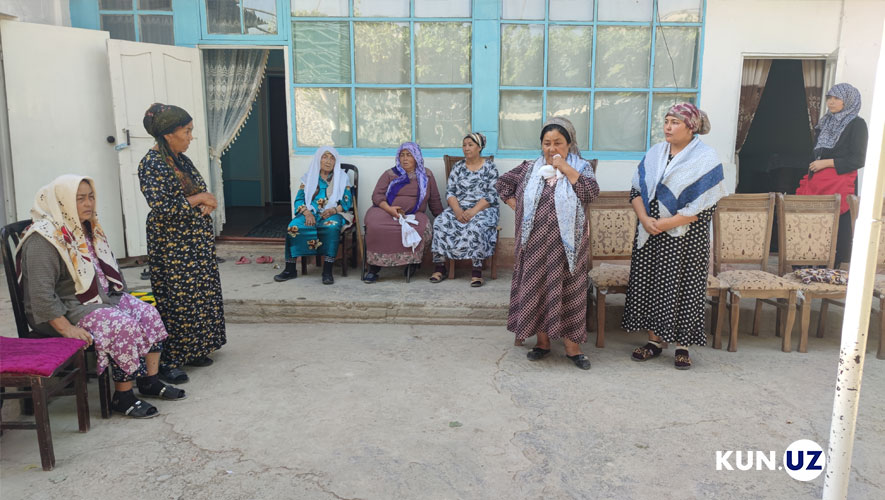 They suspected me of taking a video of the beating situation and asked me to hand over my phone. I did not give.

My father-in-law was at work when these events took place. Two days later, when he came home, he heard from his acquaintances that his son was beaten by the policemen. On August 27, my sister-in-law, who got married, came home. My father-in-law went out to buy tomatoes from the store for the pilaf. I think my father-in-law, who was angry at the situation with his son, had an argument with the district prophylactic inspectors and did not return home.

It has been 13 years since I became a member of this family. My father-in-law has never complained about his health. He was a healthy person who worked even after retirement”.

The son of the deceased, Elyor Tashpulatov, believes that his father died after being beaten by police officers.

“On August 24, at around 18:00, while I was working in the garden, my wife called me and told me that my two sons were locked in the car by the police officers. When I went to the place of the incident, the mahalla chairman, the house owner and the prophylactic inspector were standing on the street. The inspector told me to get into the car. We got into the car and came to the DIA. Then asked the police officer to take my children outside. As soon as they went out, another uniformed officer entered the room. The employee yelled at me and two officers started beating me. They laid me on the floor and kicked. The mahalla chairman did not take my side even after seeing me lying on the floor.

After some time, they took me to the hospital. A medical examination was conducted at the hospital. I told the doctor that two officers beat me. At that moment, a DIA officer named Shukur took me outside.

On that day, I was taken to the Kuvasoy city police station and told that I would be detained for 15 days. But they did not arrest me, they expelled me from the DIA around 23:30. 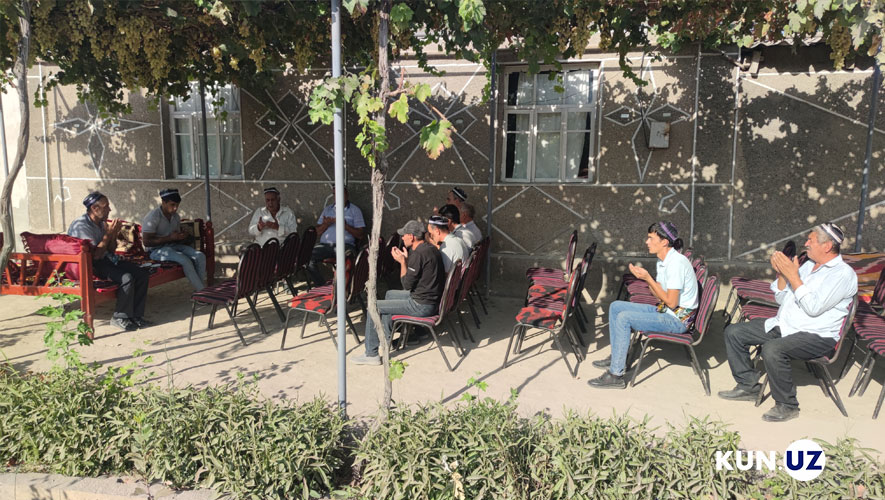 The witnesses said that on that day, when he was sitting in a café, a prophylactic inspector working in Lashkar mahalla and our inspector, Sherzod Mamadaliyev, put handcuffs on my father and took him away.

I think my father was taken somewhere and beaten. Because it is a 5-minute drive between the café and the hospital. I do not believe that my father died by himself until he reached the hospital. The doctor said that before reaching the hospital, my father already died, the inspectors requested to connect the dead patient to the apparatus and asked to massage his heart,” Elyor Tashpulatov said.

“I don’t understand why my brother, who went out to buy tomatoes, was handcuffed and taken to the hospital in a dead state. The truth should come out, the culprits must be detained. He was not sick. He died on the hands of police officers”. 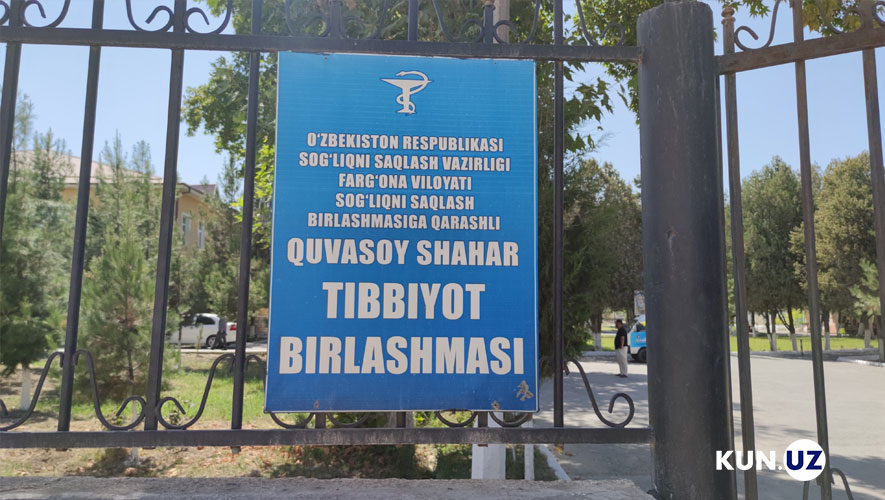 According to Kakhramon Azimov, the head of the resuscitation department of the Kuvasoy Medical Association, the deceased Khaydarali Tashpulatov was in a lifeless state when he was brought to the medical department. There were no injuries on his body.

“On August 27, at around 17:50, an unknown person was brought to the intensive care unit with the help of a prophylactic inspector. According to the police officer, the brought person lost his consciousness. On examination, there were no vital signs. Heart rate, breathing, blood pressure were not detected. Nevertheless, resuscitation procedures were applied. But the heart did not recover. We have reported the situation to the DIA. A forensic examination was assigned to determine the cause of death. No injuries were found on the body,” the doctor said. 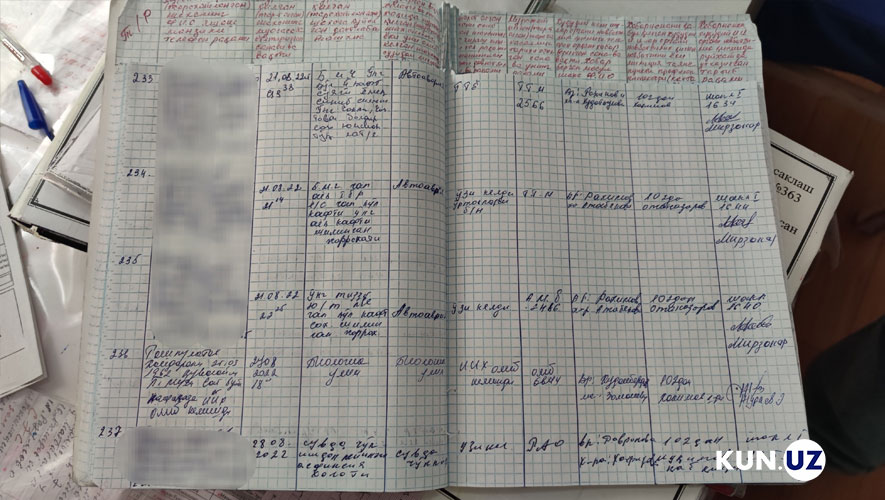 Why did the deputy oppose to interview the mahalla chairman?

We went to the service room to get an explanation from Sherzod Mamadaliyev, the prophylactic inspector who took the deceased away in his car. Unfortunately, he was not at work.

An interesting situation happened when we were going to interview Dilshod Sulaymanov, the chairman of Yukori Moyan mahalla, who witnessed the incident that day. Oybek Khudoyberdiyev, a deputy of the Kuvasoy city council, suddenly entered the chairman’s room. The deputy obstructed our activities and said that even though we are the fourth authority, they are not obliged to comment on the situation and took the chairman out of the room. The chairman followed him and left his room. 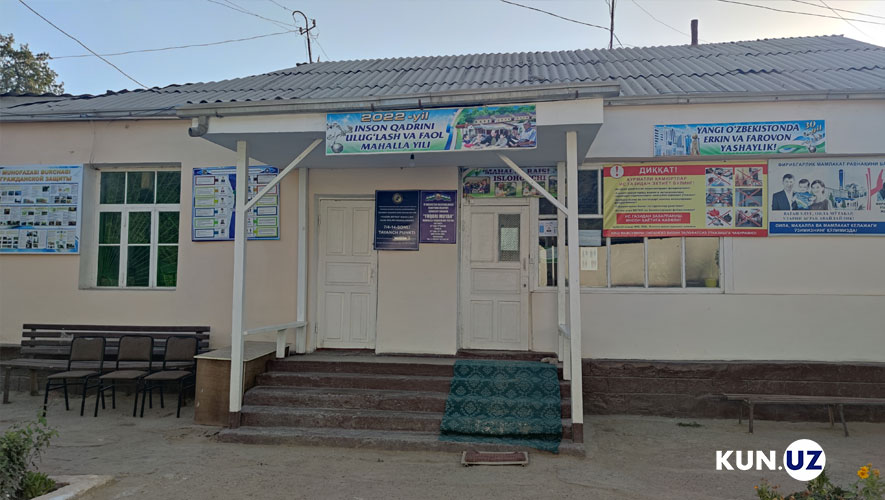 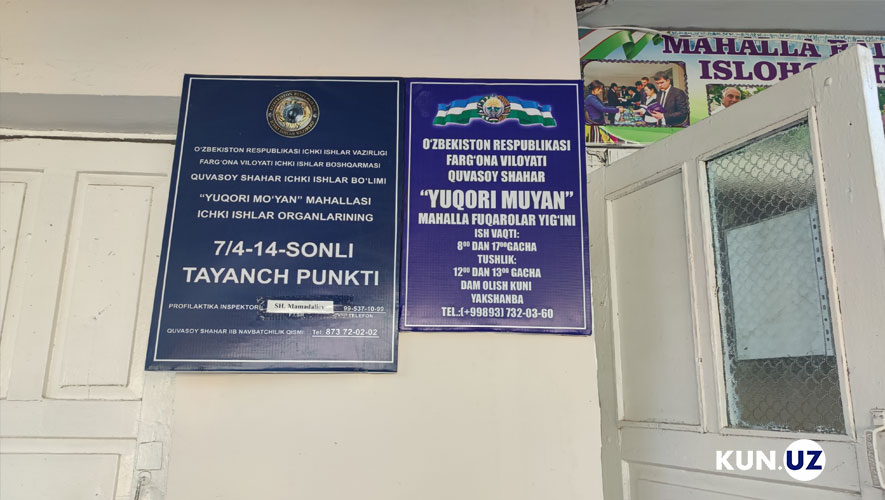 The situation itself is very suspicious. Shouldn’t the deputy himself have taken the initiative to comment on the situation?

Location of the camera in the mahalla has been changed

Mahalla residents say that the surveillance camera installed on a tree near the mahalla building and prophylactic inspector office was removed and moved to another place on the day of the incident.

According to relatives of the deceased, this may be related to the attempts of the DIA officers to delete the video footage recorded by the camera. 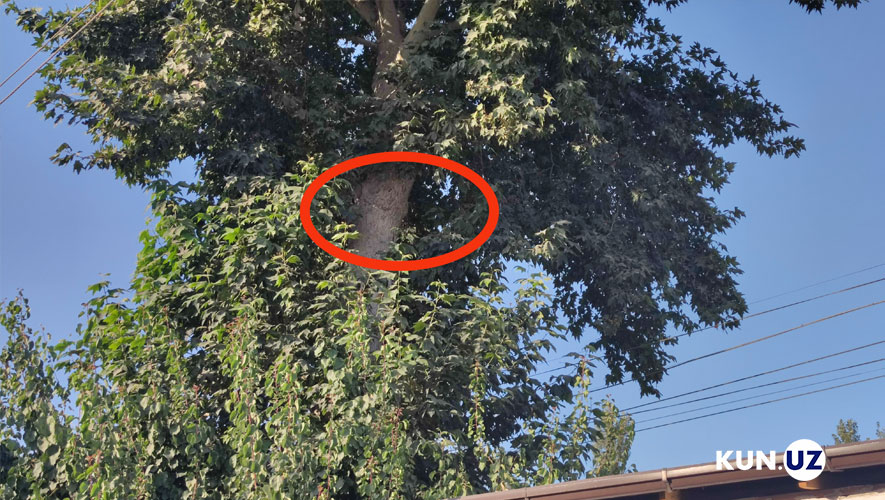 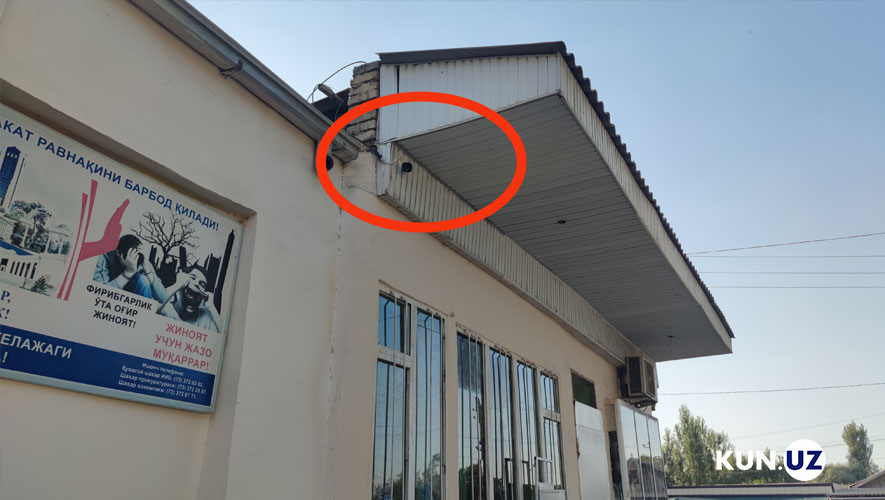 When we went to the Kuvasoy city DIA to get an explanation of the situation related to the mysterious death of Khaydarali Tashpulatov, as expected, we were told that all the responsible leaders were in a meeting and we were not allowed to enter.

So the situation is very doubtful, and there are many incident-related questions. 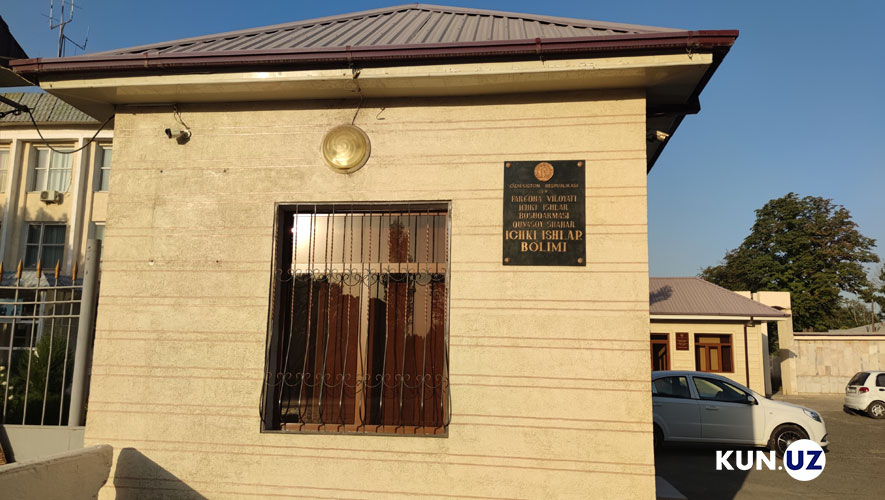 How did a person who walked out of his house to the store face with the DIA officers? Since when did police officers take a pedestrian to the medical unit for an intoxication test? How do they want to convince the public that the deceased was not abused by the staff and the death was natural? 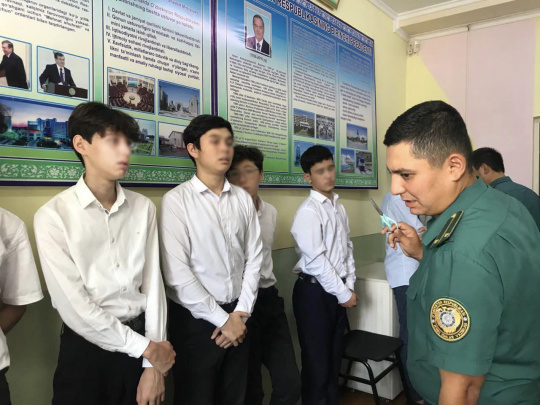 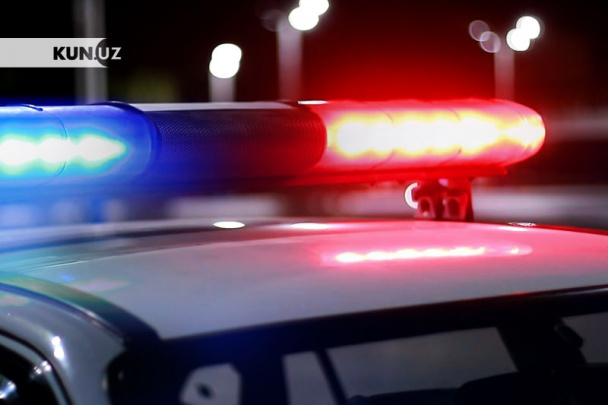 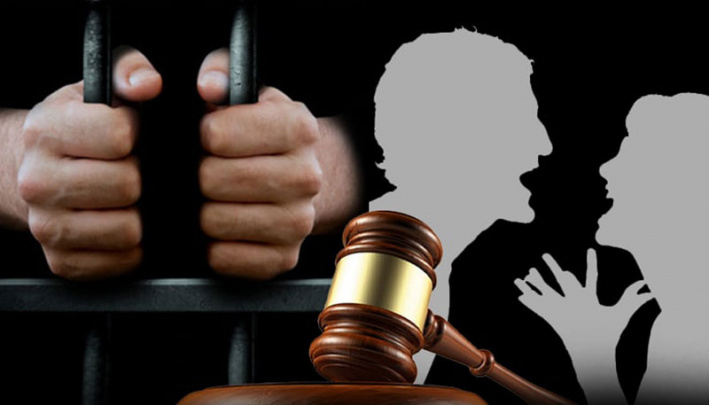 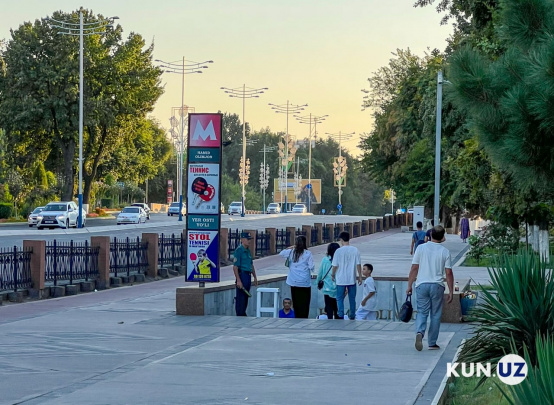