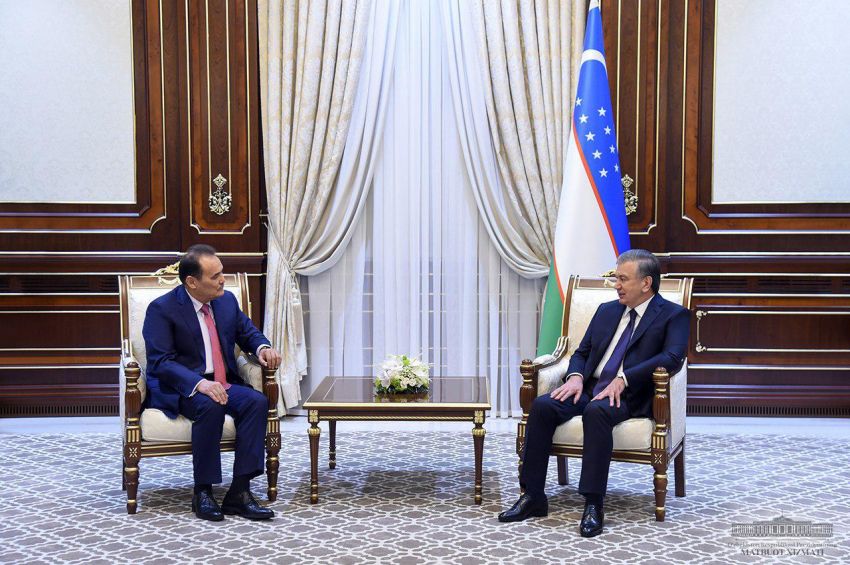 President Shavkat Mirziyoyev received on October 4 the Secretary General of the Turkic Council Baghdad Amreyev, who is on a visit in Uzbekistan to attend the CCTS Investment Forum and the Business Council meeting, the presidential press service said.

Mirziyoyev, warmly welcoming the guest, noted with satisfaction the dynamically developing cooperation between Uzbekistan and the Turkic Council.

On September 14 this year, Uzbekistan ratified the Nakhichevan Agreement on the establishment of the Turkic Council and will already participate as a full member in the 7th Summit of the Council, which will be held on October 15 this year in Baku.

It was noted that Uzbekistan and the countries of the Turkic Council have historically been connected not only by a cultural, linguistic, spiritual community, but also traditionally friendly and mutually beneficial relations.

The potential of the Turkic Council as an effective regional structure that promotes the development of practical cooperation, primarily in such relevant areas as trade, investment, innovation, transport, tourism, as well as in the field of cultural and humanitarian exchange was highly assessed at the meeting.

The Secretary General of the Turkic Council expressed great appreciation to the President of Uzbekistan for the warm welcome and sincerely congratulated on the upcoming full accession of the country to the Council.

It was emphasized that accession of Uzbekistan will further strengthen productive multilateral cooperation within the framework of the Turkic Council.

Baghdad Amreyev praised the ongoing large-scale transformations in Uzbekistan in the field of state and public construction, liberalization of the economy, improving the business environment and investment climate.

He emphasized the successful development of long-term and mutually beneficial relations of Uzbekistan with foreign partners, especially strengthening friendship and good neighborliness with neighboring states.

The distinguished guest informed the President of Uzbekistan about the preparations for the upcoming summit of the Turkic Council and assured that he would continue to contribute to the development of fruitful relations between the Council and Uzbekistan.

21:58
President of Uzbekistan recognized in Kyrgyzstan as Person of the Year

15:15 / 15.02.2020
NPP construction contract may be signed during Mirziyoyev’s visit to Moscow
Leave a comment.You must register to post a comment!
Authorization with social networks