Vice-Chancellor of University of Westminster (UoW), Peter Bonfield, and the rector of the Westminster International University in Tashkent (WIUT), Komiljon Karimov, held negotiations in London. 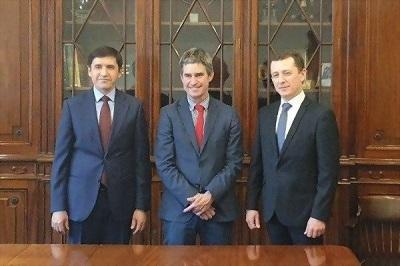 Following the talks, WIUT and the UoW (London) have signed a new agreement aimed at developing a strategic partnership in the field of personnel training in order to ensure standards of quality education.

“The agreement, in particular, provides for introducing new bachelor’s degree programs in financial technologies, business management and marketing, and master’s programs in human resources management and data analytics at WIUT. The parties also agreed to cooperate in organizing short-term and training courses for the advanced training of civil servants, business representatives, and individuals in relevant areas,” the press-service of WIUT reports.

Moreover, both sides expressed interest in organizing joint events aimed at demonstrating the rich cultural and historical heritage, tourist and investment potential of Uzbekistan to the British public.

Peter Bonfield praised the pace of modernization in Uzbekistan, its significant human potential, as well as the development of higher and vocational education. According to him, it creates favorable conditions for interaction and encourages UoW and other British educational institutions to cooperate with Uzbek partners.

Deputy Vice Chancellor of University of Westminster (London) for Global Engagement, Professor Alexandra Hughes, plans to pay a visit to Uzbekistan in early March, in order to develop concrete measures for the practical implementation of the provisions of the agreement. Peter Bonfield will also visit Uzbekistan again for the same reason in November 2020.

22:00 / 27.03.2020
Ministry of Higher Education: Stipends will be paid in full to students in non-cash form
Leave a comment.You must register to post a comment!
Authorization with social networks